skip to main | skip to sidebar

Consent of the Governed: Speech from the Massachusetts Rally Against the War on Women 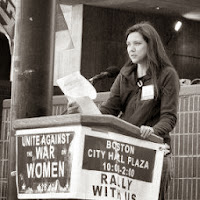 Our government derives its just powers from the consent of the governed. Do we consent to how we women are being governed?
No!

In 1920, after years of struggle, marching, tedious meetings, and exhausting work, the 19th amendment was ratified, and women, at last, had a guaranteed right to vote. Don’t let all that work go to waste.
Vote for the relationship builders!
Vote for the competent!
And vote for the knowledgeable! Vote out any man who thinks women can get pap smears at Walgreens!
Be thoughtful. Be smart. Be powerful.
Use the 19th!
Posted by Unknown at 10:41 AM